The aunt of one of the women found alive after having been kidnapped in Cleveland 10 years ago says "If you don’t believe in miracles, I suggest you think again."

Gina DeJesus was abducted when she was 14 years old and raped for a decade … and you say "God is looking out for us"?

That's not really the kind of protection I want for my family.

Some "big news" recently that the woman who worked for British Airways who had already won a ruling to allow her to wear a cross in the workplace, has now taken that same case to the European Court of Human Rights and proven that she has the same right there too.

The FT: "BA employee wins right to wear cross."
(She already HAD that right. FFS!)

And of course, the Daily Fail: "'Thank You Jesus' Christian British Airways employee tell of joy as after European court finds she DID face discrimination over silver cross."
(Thanks Jesus! You've allowed a court to re-state the obvious! Well done!)

What most of the coverage is failing to make clear is that there were in fact FOUR court cases being brought before the ECHR and the other three ALL LOST their court cases.

One of those who lost their court case was Gary McFarlane, a relationship counsellor who refused to counsel gay couples because of his religious views. I previously posted an interview with him here (shocked at the lack of opposing voices provided in the interview, but fairly pleased with the amount of pressure placed by the interviewer himself).

The other two were:
- Lillian Ladele, a chaplain who refused to perform civil partnerships. It has now been decided that her wish to discriminate on religious grounds does not trump gay rights or the requirements of her employers.

- Shirley Chaplin, a nurse who had refused to accept the option of wearing a cross a different way in her workplace, such as in the form of a lapel pin. She lost the case that wearing the cross on a chain, which is against the uniform rules for nurses in UK hospitals, was a necessary part of her freedom of religious expression in the workplace.


Andrew Copson, as always, delivers some proper common sense below:


Side-Note
Interestingly, a google image search for "ECHR religion rulings" mostly comes up with images related to a case from 2010 where a woman was unable to get her abortion within Ireland in spite of a risk to her life. There were a lot of protests against the ruling by anti-choicers, but perhaps if Ireland had taken that case a little more seriously (since unlike the above, it actually contradicted their own rulings) Savita might still be alive. 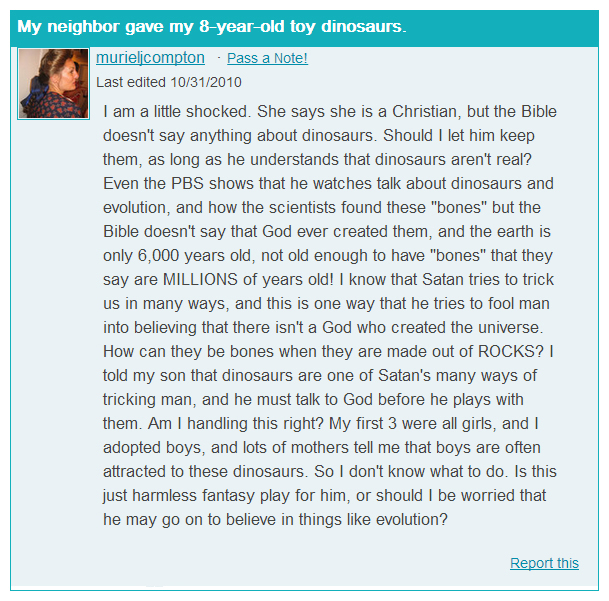 Enough is enough! It's time to draw the line against the Republican war on women's rights. Forced vaginal ultrasounds, "forcible rape" legislation (Paul Ryan and Rep. Todd Akin were 2 of the 227 Republican co-sponsors of House Bill H.R. 3: "No Taxpayer Funding for Abortion Act" that re-defined the word "rape"), H.R. 358: "The Let Women Die Act" which, among others things, would allow Catholic hospitals to let pregnant women die rather than transfer them to another hospital for an emergency abortion, fertilized egg as person bills at the federal and state levels, abortion restrictions in a plethora of states, attempts to allow employers to deny coverage of contraception in insurance plans according to the employer's conscience, etc. ad nauseum.

I signed The Reproductive Bill of Rights and I urge everyone else to do so. Politicians have no business interfering in our reproductive decisions. Let's create a tsunami of support for reproductive rights!


Survey: One in five Americans has no religion

Washington (CNN) – The fastest growing "religious" group in America is made up of people with no religion at all, according to a Pew survey showing that one in five Americans is not affiliated with any religion.

The number of these Americans has grown by 25% just in the past five years, according to a survey released Tuesday by the Pew Forum on Religion and Public Life.

The survey found that the ranks of the unaffiliated are growing even faster among younger Americans.

Thirty-three million Americans now have no religious affiliation, with 13 million in that group identifying as either atheist or agnostic, according to the new survey.

Pew found that those who are religiously unaffiliated are strikingly less religious than the public at large. They attend church infrequently, if at all, are largely not seeking out religion and say that the lack of it in their lives is of little importance.

I found this interesting:

The Pew survey suggested that the Democratic Party would do well to recognize the growth of the unaffiliated, since 63% of them identify with or lean toward that political group. Only 26% of the unaffiliated do the same with the Republican Party.

I have to admit that I don't know any Atheists or Agnostics who are Republican. Is there anyone in this community who is or do any of you know someone who is? I'd be interested in hearing how they justify their political affiliation given the fact that the Republican party is traditionally centered heavily around and supported by those with evangelical religious beliefs (but not always).

Hello! We are Nikki Jones, Ph.D.  (Assistant Professor of Psychology, Colorado Mesa University) and Melanie Brewster, Ph.D. (Assistant Professor of Psychology and Education, Columbia University).  We are conducting a study about allies for LGBTQ groups and especially interested in the experiences of both atheist and religious individuals.
In order to participate, you must be 18 years old, and living in North America.  If you would like to participate in our study, please click on the link below and you will be directed to the online survey:
https://coloradomesasbs.us.qualtrics.com/SE/?SID=SV_9mcD9FMqB6xMGKo
Thank you very much in advance for your time!  Please feel free to pass on this link to other people who might be eligible. We hope to represent the experiences of a diverse group of allies, so please feel encourage allies of different racial, ethnic, gender, age, and other backgrounds to participate.

According to this guy, anyway.

Rep. Louie Gohmert (R-Texas) said Friday that the shootings that took place in an Aurora, Colo. movie theater hours earlier were a result of "ongoing attacks on Judeo-Christian beliefs" and questioned why nobody else in the theater had a gun to take down the shooter.

During a radio interview on The Heritage Foundation's "Istook Live!" show, Gohmert was asked why he believes such senseless acts of violence take place. Gohmert responded by talking about the weakening of Christian values in the country.

"Some of us happen to believe that when our founders talked about guarding our virtue and freedom, that that was important," he said. "Whether it's John Adams saying our Constitution was made only for moral and religious people ... Ben Franklin, only a virtuous people are capable of freedom, as nations become corrupt and vicious they have more need of masters. We have been at war with the very pillars, the very foundation of this country."

"You know what really gets me, as a Christian, is to see the ongoing attacks on Judeo-Christian beliefs, and then some senseless crazy act of a derelict takes place."

Just explained the Higgs boson to my friend even tho I don't understand it. He was very convinced. I bet this is how religions get started.

JENNY Klinge,  Norway’s Centre Party justice policy spokeswoman, has angered religious leaders by condemning the ritual circumcision of infant boys. Calling it “outdated” and “dangerous”, she called for its ban. She said:

In my view, this is a custom that we cannot accept in a modern, civilized society. Our aim is to prioritise the rights of small children. Fortunately, it has become forbidden to circumcise girls, now it’s time for boys to get the same legal protection.

She stressed that boys who have been ritually circumcised can never remove what she called “a religious marker” if they choose to convert to another religion or have no religious beliefs.

I’m not buying the argument that banning circumcision is a violation of religious freedom, because such freedom must involve being able to choose for themselves.

Glen Poole, Strategic Director of The Men’s Network in Brighton & Hove, reports on his Ending Unnecessary Male Circumcision in the UK blog that the proposed ban had also been condemned by Espen Ottosen, Information Director of Misjonssambandet (Federation of Christian Missionaries), and a Muslim Norwegian physician, Mohammad Usman Rana, who voiced his opposition in a newspaper article entitled Circumcision: Those who will forbid circumcision of young boys in reality invite a totalitarian guardian-state.

Poole points out that pro-circumcisionists claim:

To circumcise boys is a minor operation. Internationally there is a plethora of medical studies which report few complications. We know that the procedure actually provides health benefits.  Urinary tract infections for example are far less common among circumcised boys.  The risk of HIV contamination is also reduced.

We say all the reported health benefits have either been disproven, contradicted or considered too insignificant to justify the agreed risks and complications which include bleeding, infections, meatus stenosis (narrowing of the urethra) and panic attacks. There isn’t a single medical association in the world that supports the procedure.

The British Medical Association, for example, stated in 2003 that ‘the medical benefits previously claimed have not been convincingly proven’ and ‘that the evidence concerning health benefits from non-therapeutic circumcision is insufficient for this alone to be a justification for doing it.

Nothing much to add to this except that I find it amusing to see a religious objection that protecting young children from abuse is "totalitarian". 'My goodness, laws against the mutilation of young boy's genitals? Parts of young children cut off in the privacy of my own home should be of no consequence to the government. It's the nanny state I say!'

Pretty much the only argument against this law is "what about freedom of religion?" and, to be frank, it's not looking like a strong case. You could make a similar argument for human sacrifice, though that has the added benefit that at least the person affected would be doing it of their own free will.
Collapse